13 People + 9 People - Towards the Establishment of the Chemistry Department -

The history of the chemistry classroom in the Department of Science at Nagoya University began when three courses were opened on April 1, 1942. At that time there were only 13 members of faculty. The first generations of professors were Yuuji Shibata, Ken Sugahara, and Tamotsu Sano. The first assistant professors were Hajime Yamazaki and Fujio Egami. The first assistants were Shun Mouri and Shigeru Miyanohara. There were five administrative employees and research assistants, taken together, and a glass craftsman Toshio Ishiyama. The first round of student recruiting called for a student body of 15 members, and only 9 were recruited. They entered as the first class of the Chemistry Department in the Department of Science at Nagoya University.

One year prior to this, Mr. Shibata, Sugahara, Sano, and Yamazaki were working on the establishment of a chemistry room as instructors in the Department of Science and Engineering. However, because exchange with foreign countries ceased during the war, regular general business became highly difficult to conduct. For example, in order to obtain the back number of an academic magazine, a Nagoya book shop would have to be used, or alternatively the donations of an individual or another organization relied on, and finally the magazine could become part of the chemistry literature. The next year when the school year changed in April of 1943, the number of courses offered was increased by two, and at last, the Chemistry Department was complete. Also, by April 1944, the number of instructors was increased as follows.

Intensification of the War - The Troubled Period -

However, administration of the Chemistry Department was extremely difficult in the period immediately following establishment. Because of intensification of the Pacific War, the number of years students attend school was necessarily limited to only two and a half years. The first class graduated in September 1944. 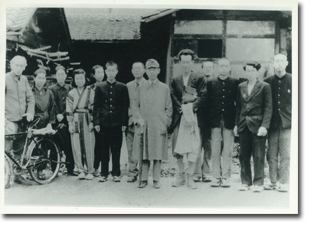 Entering into 1945, Nagoya began to incur frequent air raids. Thus, all laboratories had to be evacuated. Lectures were still held in the evacuation locations, but research activity all but ceased during the period. Fortunately none of the members of the Chemistry Room were killed in the air raids, and all members were safely gathered at Higashiyama at the end of October, 1945, and lectures were reopened finally on November 12, 1945.