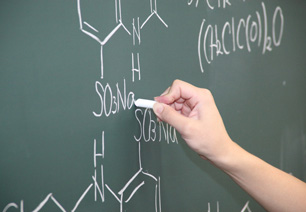 Students entering the university attend lectures and belong to one of the 13 laboratories and groups, execute research under the guidance of their guiding professor and aim for obtaining a master's degree. Among the courses, there are core courses where chemistry specializations are deeply pursued, and boundary courses for the obtainment of knowledge between academic disciplines that are the ideals of the science research department. Both types of credits are required. Also, research (practicum) course credits obtained through seminars in the laboratories are also required. After entering the university, a master's thesis is written in an average of two years, and a master's degree is conferred. There is also a system of awarding an honor prize [Excellent Thesis Award] that aims to increase the desire for the pursuit of knowledge in the research of students in the graduate school. After the master's degree is obtained, the student remains in the graduate school and moves on to the doctoral second half course. Students that aim to deepen their research path and obtain a doctorate and those who obtain work at a private enterprise, and various other types of people are in the school. In the three years from 2008 to 2010 there were 109 people who received masters degrees. Among them there were 31 individuals who moved on to the latter half of the doctoral course and 72 who pursued employment in private enterprise, and 5 others. There are also quite a few cases of students who obtained their master's degree at another institution entering the latter half of the material sciences specialization (Chemistry Department). In both cases after a course of study of three years, a doctoral thesis is written and if the degree examination is passed a doctoral degree (in science) is awarded. This is the birth of a mature researcher. Also, there is also a high speed system in which especially superior students are awarded their doctoral degree without waiting three years. The road after obtaining the degree is also varied, ranging from becoming a researcher at a university or a research organization, a private enterprise, and various other types of doctorate level researcher positions.

In recent years, graduate students have been becoming TAs (teacher's assistant) or RAs (research assistant) and working actively in the education and research at the graduate level in the Science Department Chemistry Research Department. TAs help with undergraduate level courses and chemistry experiments, and every year around 60 doctoral course first half (masters course) students are selected for the job. RAs participate in research projects that take place in each laboratory, and help in the efficient and effective research activities and the management of devices. There are around 5 doctoral course later half students (doctoral course) selected for this job every year. Graduate students earn a stipend for their work and obtain excellent training in order to be an educator or a researcher. 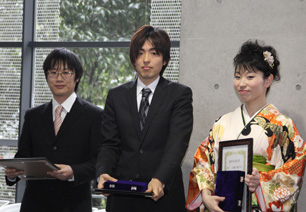 The continued advancement of the standards of fundamental science is important in the 21st century. It is also expected that creative scientific technology will be widely created. In this fluid and non-transparent generation it is indispensable to produce excellent people to become the guiding force to create a rich future.
It is widely acknowledged that our Material Sciences Specialization Chemistry Department has developed research and education as the center of global chemistry. However, in order to bring about even more development giving high quality specialized education to young researchers is important, and we are in the process of providing complete schooling to students for this purpose.
The evaluation of the hidden abilities and research adeptness of young researchers is a pressing current issue and extremely important. Evaluation is also linked to the content of the schooling, but herein we execute this as the [Excellent Thesis Award], and we hope that it becomes the driving force for students to their own character by studying hard.

Candidates for the [Excellent Thesis Award]

Those enrolled in the first half of the doctoral course at our Material Science Specialization Department of Chemistry, and who have passed the masters test.