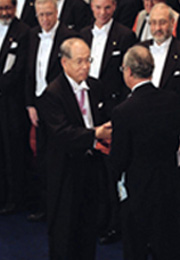 William S. Knowles, a retired chemist from Monsanto Company, U.S.A., and Professor Ryoji Noyori, Nagoya University, Japan, shared one half of the 2001 Nobel Prize for Chemistry for their work on chiral-catalysed hydrogenation reactions.

Many molecules appear in two forms that mirror each other - just as our hands mirror each other. Such molecules are called chiral. In nature one of these forms is often dominant, so in our cells one of these mirror images of a molecule fits "like a glove", in contrast to the other one which may even be harmful. Pharmaceutical products often consist of chiral molecules, and the difference between the two forms can be a matter of life and death - as was the case, for example, in the thalidomide disaster in the 1960s. That is why it is vital to be able to produce the two chiral forms separately.

Dr. Noyori succeeded in synthesizing the famous BINAP, a molecule that can facilitate organic reactions to produce one of the two mirror-image compounds (chiral molecules). Other powerful ligands are now available, but BINAP is still one of the most versatile in chiral synthesis. Thus Dr. Noyori ́s newly invented BINAP-Ru(II) complexes exhibit an extremely high chiral recognition ability in the hydrogenation of a variety of functionalized olefins and ketones. Both product enantiomers can be synthesized efficiently and with equal ease by choosing the proper enantiomers of the catalysts. This transition metal catalysis is clean, simple and economical to operate and hence is capable of conducting a reaction on any scale from<100 mg to>100 kg . In addition to industrial production of compounds such as (R)-1,2- propanediol (10 tons/year) and a chiral azetidinone for carbapenem synthesis (120 tons/year), this hydrogenation method is utilized in academic and industrial research laboratories to develop pharmaceuticals, agrochemicals, flavours and fragrances. In recent years, Noyori has demonstrated asymmetric hydrogen transfer reactions in simple ketones, such as acetophenone. Dr. Noyori's work has been used in the pharmaceutical, agro- chemical, flavours and fine chemical industries.