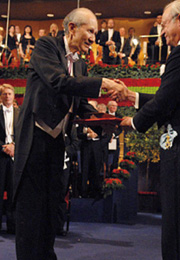 GFP is one of the most important and indispensable tools in biology and medical research. The Royal Swedish Academy of Sciences awarded the Nobel Prize in chemistry of 2008 to Dr. Osamu Shimomura (Japan), Dr. Martin Chalfie (USA), and Dr. Roger Y. Tsien (USA) for the discovery and development of the green fluorescent protein, GFP. Dr. Shimomura first isolated GFP from the jellyfish Aequorea victoria, and discovered that this protein glowed bright green under ultraviolet light. Dr. Chalfie demonstrated the value of GFP as an important tool in understanding various biological phenomena. Dr. Tsien contributed to our general understanding of how GFP fluoresces, and also developed related proteins emitting colors other than green, which enabled scientists to follow several different biological processes at the same time.

As he said, "I had no idea of the applications of GFP", Dr. Shimomura's research was purely motivated by intellectual curiosity to uncover the mystery of bioluminescence of jellyfish. Beyond his expectation, however, GFP has found utility in visualizing the movement of proteins inside cells, thereby being evolved into an indispensable tool in biology and medical research.

Tens of thousands of different proteins reside in a living organism. Therefore it was extremely difficult to observe each protein separately. After about 30 years from Dr. Shimomura's discovery, GFP made this possible. The gene of GFP has been identified, and thereafter it became possible to connect GFP to other interesting, but otherwise invisible, proteins by using DNA technology. We can now trace the movement of the protein by following the green fluorescence of GFP. This technology is now widely used in identifying important clinical problems such as the process how cancer cells spread and how nerve cells damage during Alzheimer's disease.